Welcome at the 'The Walking Mars project page'! 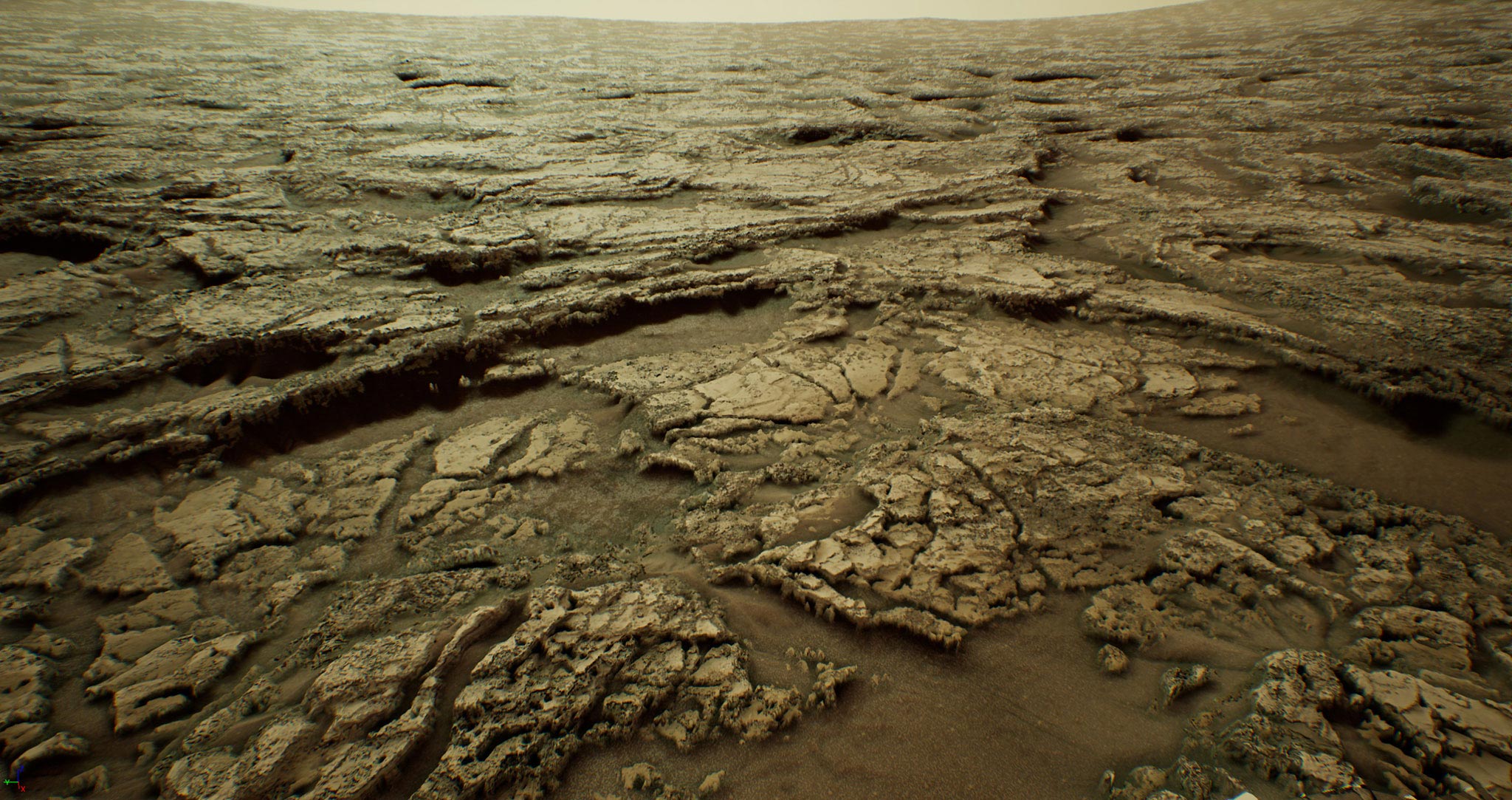 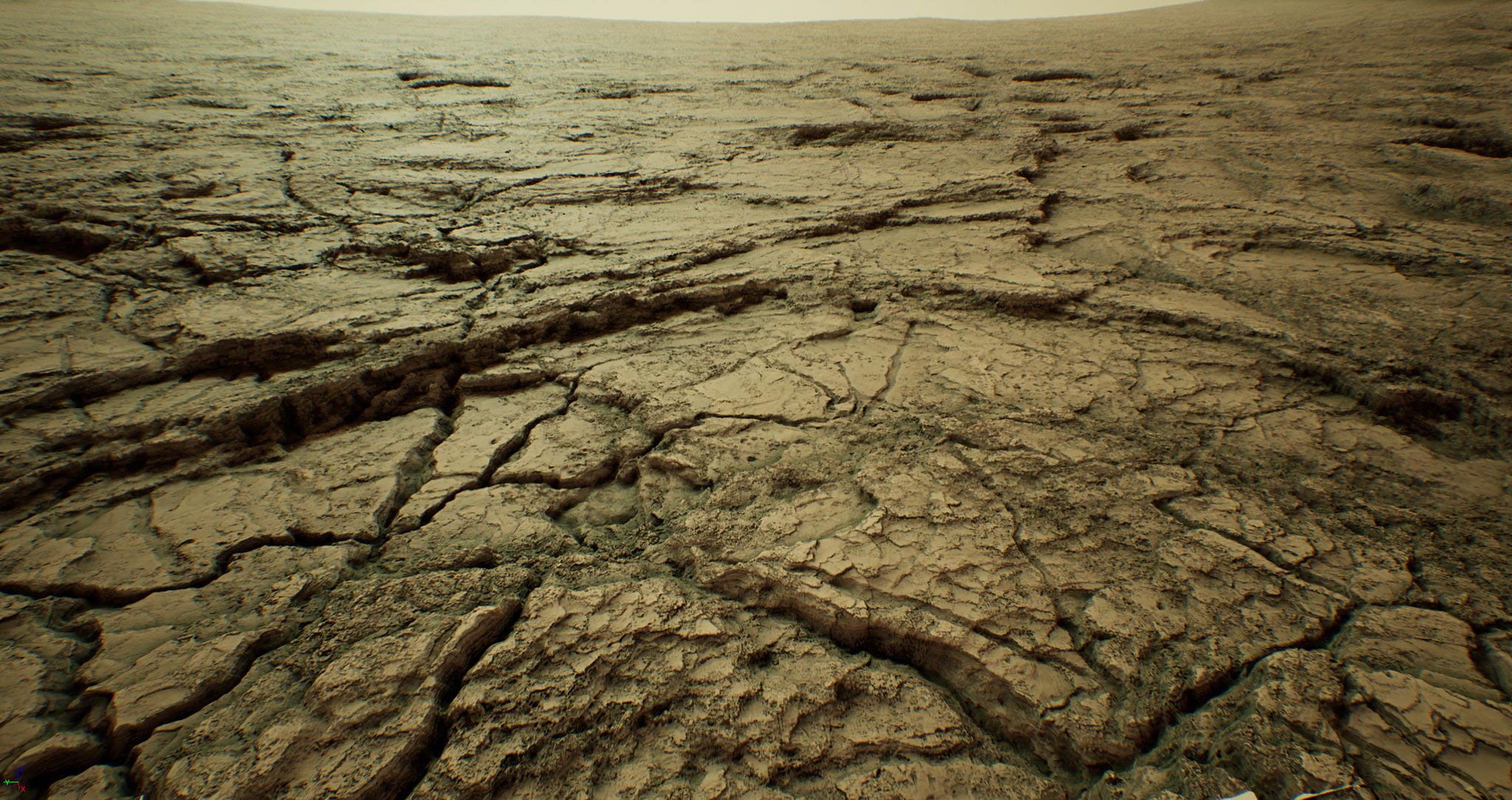 I used a rather complex shader network to accomplish this feature. A common way is to use heighblending, but here I took it one step further. The sand can be raised and lowered based upon a painted area. The more white there is, the more rocks will be covered in sand. The sand texture is slightly blurred heightmap texture that creates small slopes against the rocks. The more sand is shown, the more flowed dunes are revealed. 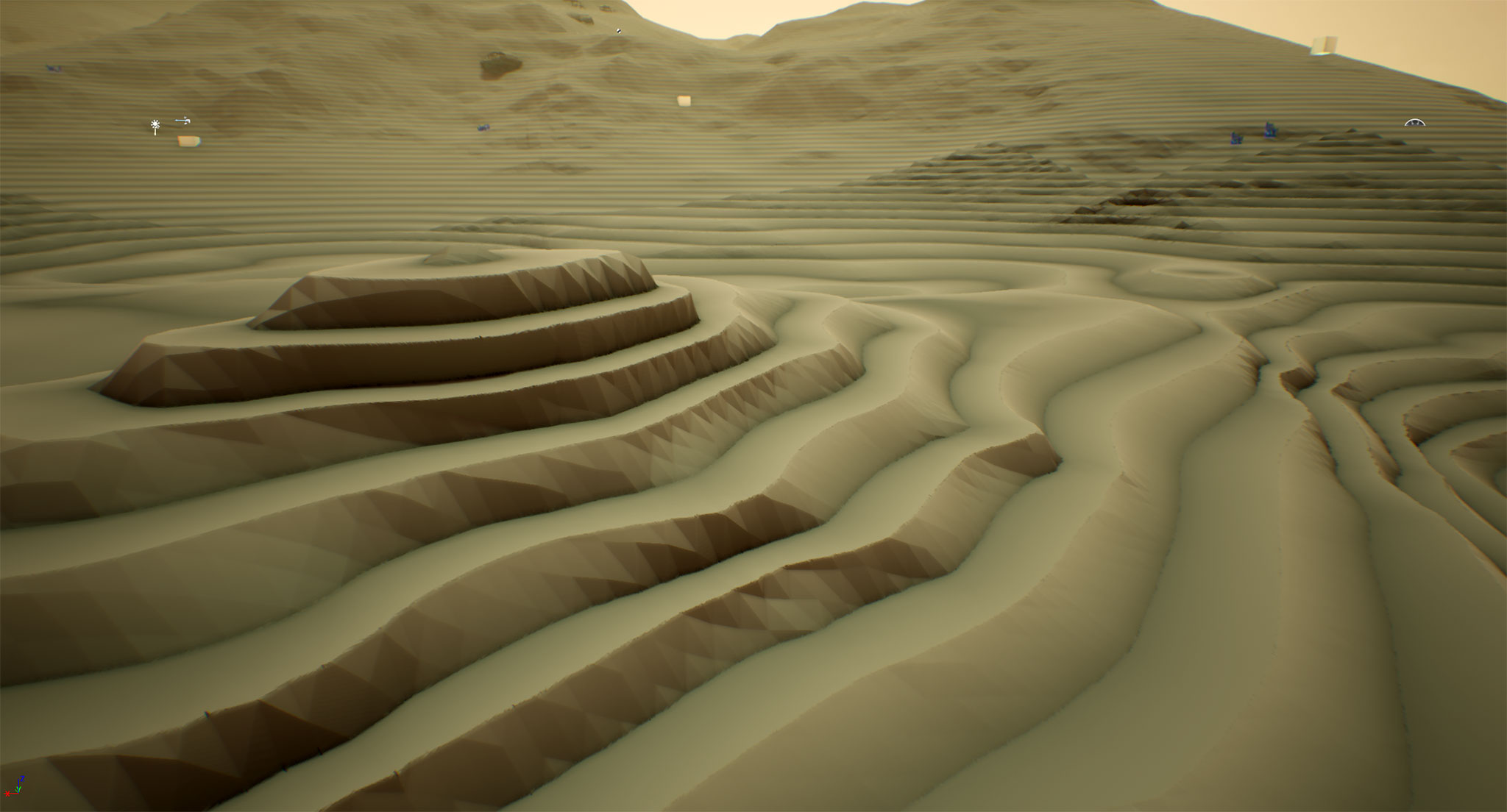 Realtime terrace effect such as the filter found in World Machine but this is realtime.

Made using simple math and displacement.

Procedural created rocks covered in sand. After a few tests with simple textures with cracked rocks, I tried a different approach. Using simple math to create a stepped displacement out of the height map of the terrain and cut out these steps with a crack mask. This create a much more organic and natural look. The normals are generated using DDX and DDY. The blocky artefacts are hardly noticeable since the tessellation is very high and the surface very rough. 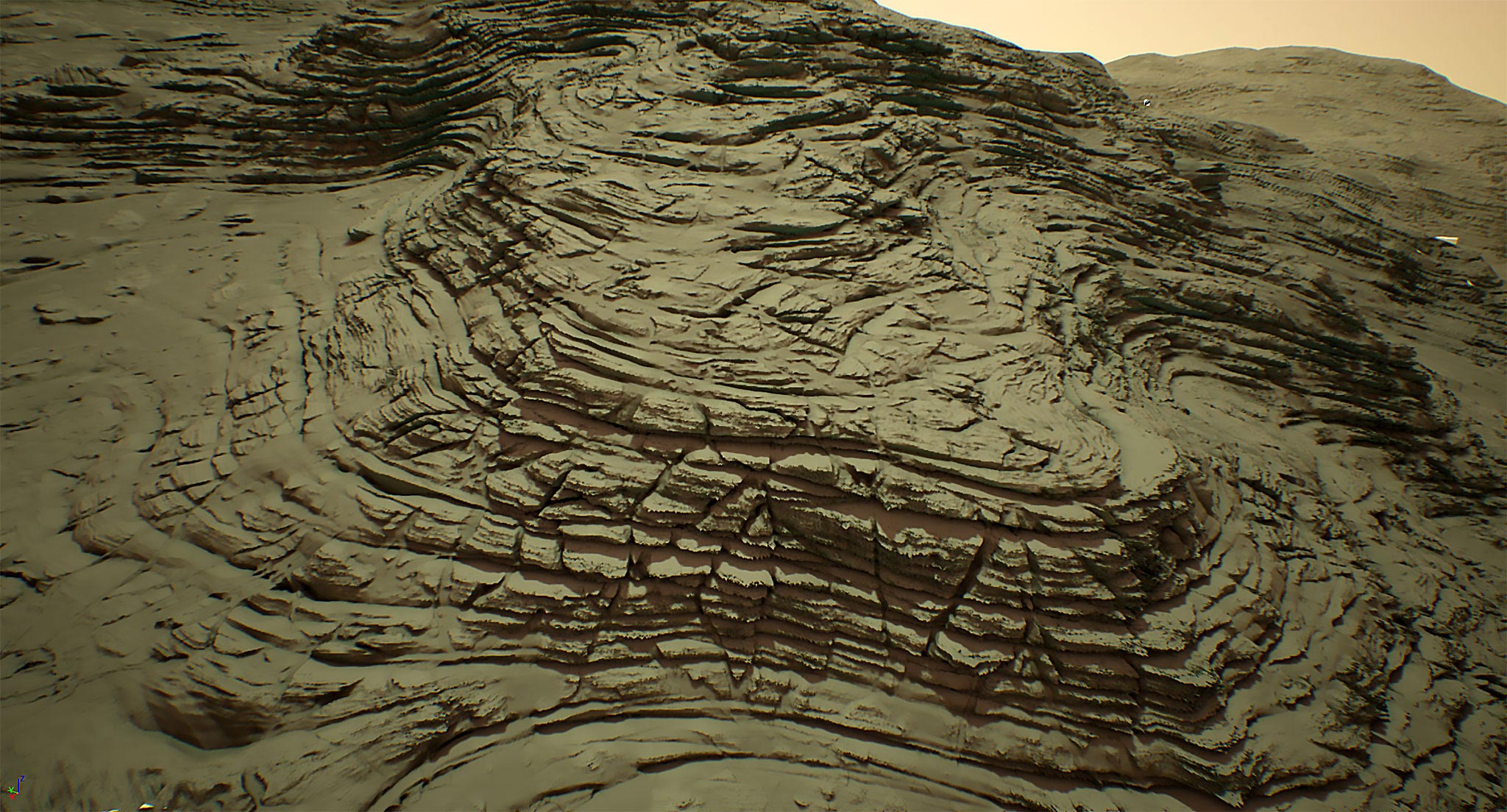 Drag the slider to see the difference between flow modifier set to zero and to an more extreme value.

In order to get everything out of the shape of the terrain I created a setup that allows me to deform the strata along with the landscape. I created a heightmap in world machine that guides the texture and deforms it along the hills. This way the landscape feels much more collapsed and more organic and less uniform. I think every texture and structure should accentuate the shape of the terrain. Otherwise it just will not look realistic. (it is a very hard task btw) 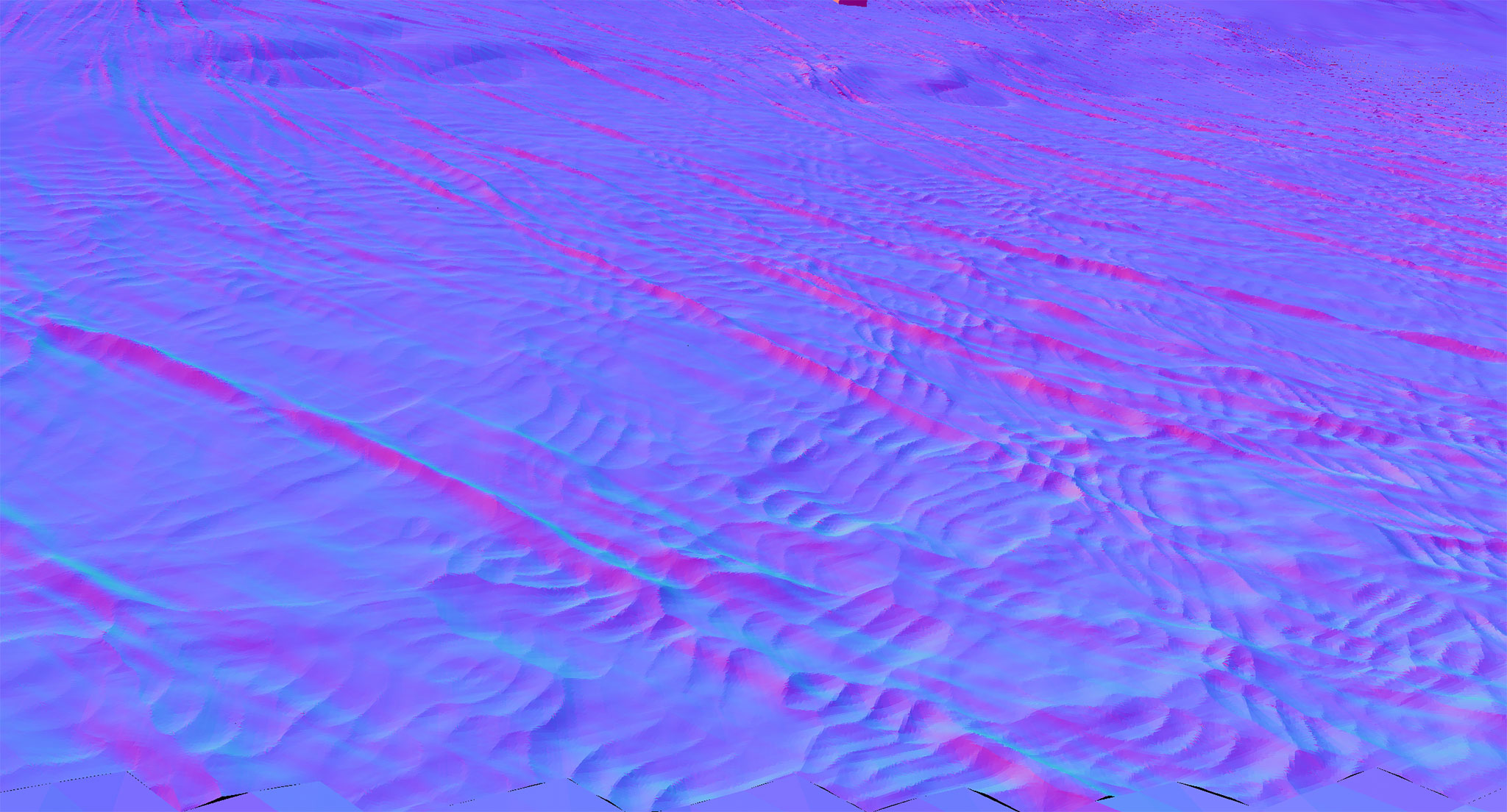 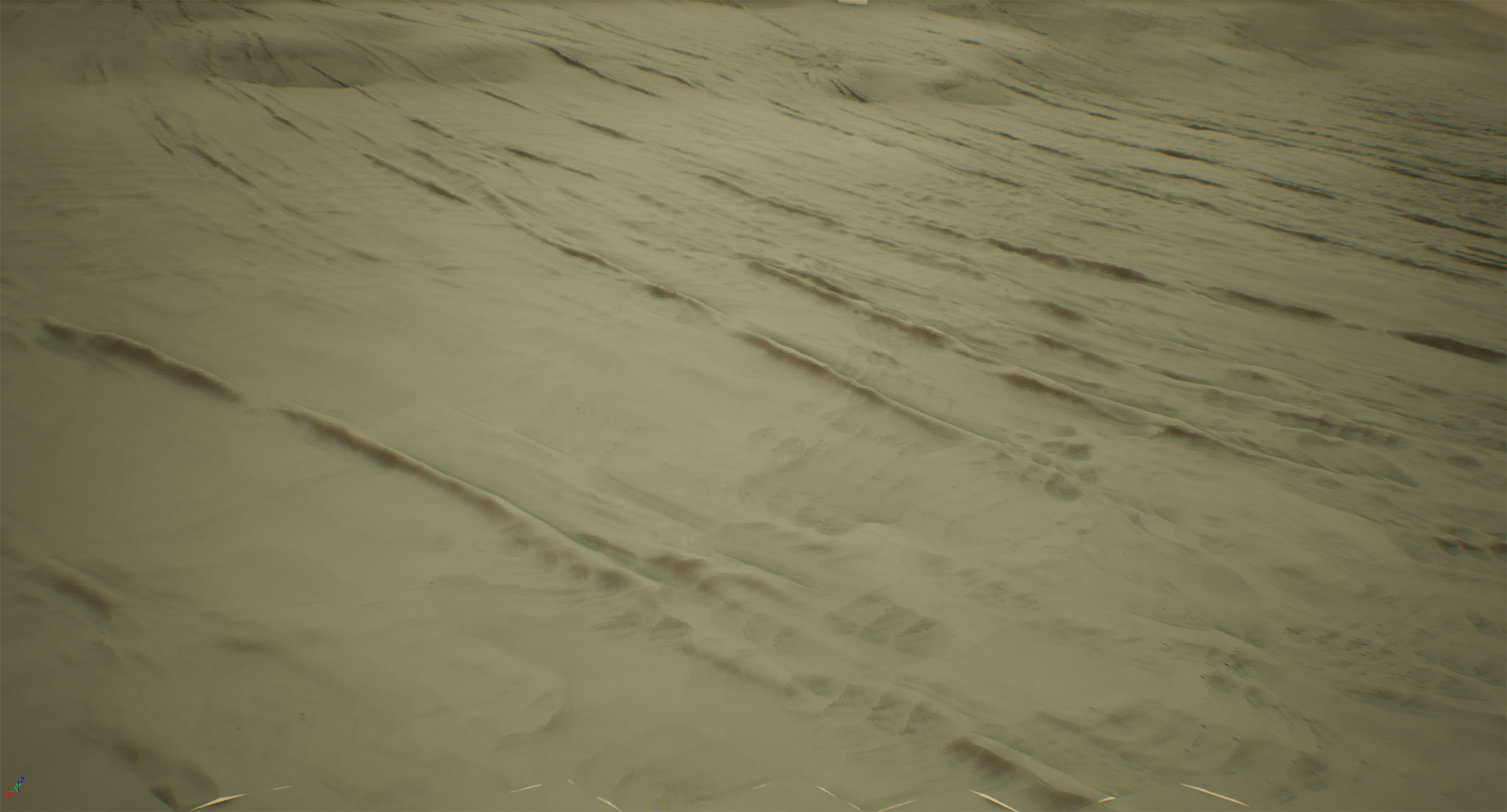 Drag the slider to see the normal map. It shows the flow lines more clearly

Stil on a mission to crack the code to create vertical flow lines using realtime shader techniques. Similar to the erosion flow masks that comes with World Machine. This shader is very heavy on performance because it samples one texture a lot of times with an offset along the vertex normal. It creates however natural looking flow lines flowing on slopes and merges together in the flat areas creating sand ripples. Also, here I did not sample normals, I rather used the auto generated normal map feature with also creates the blocky artefacts.

Testing ways to create a cracked mask based upon white / black input. White will be most cracked to almost invisible and black remains solid shape.

The linear gradient can be replaced with a height map. So this way, I am able to paint areas on the foot of hills or other places where I want the rock to be more cracked. 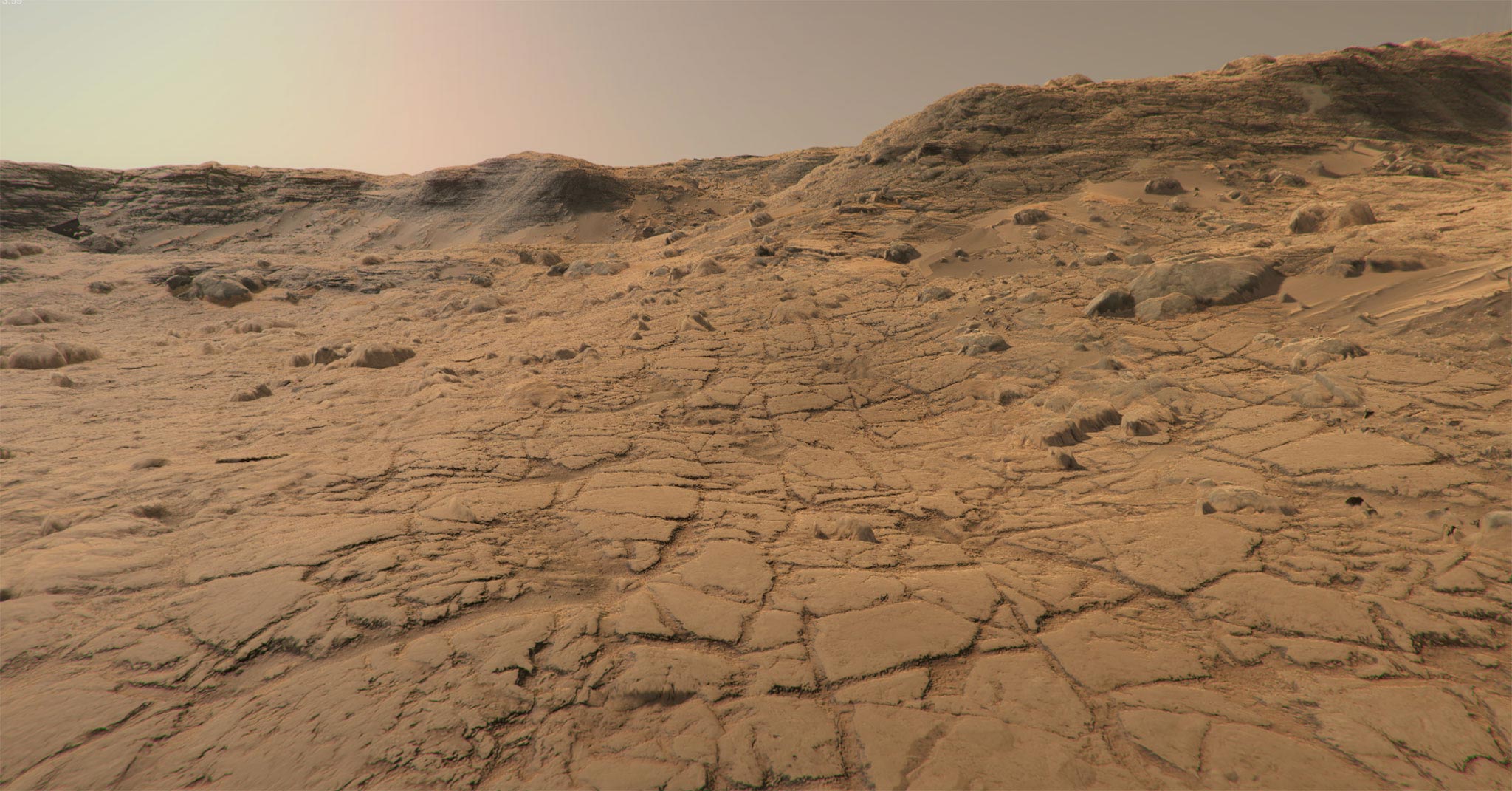 Last revision using Unity. Although I like the textures and the general look and feel, the landscape stil looks way too textured. Colours, structures, flows etc in nature are strong attached to the shape of a terrain.

Also, the shader for the terrain was way too heavy in terms of layers. I used a lot of separate layered and combined textures to add a lot of variety to it. Trying to create a shader that fixes structures on a more procedural way gives the landscape a more organic look. 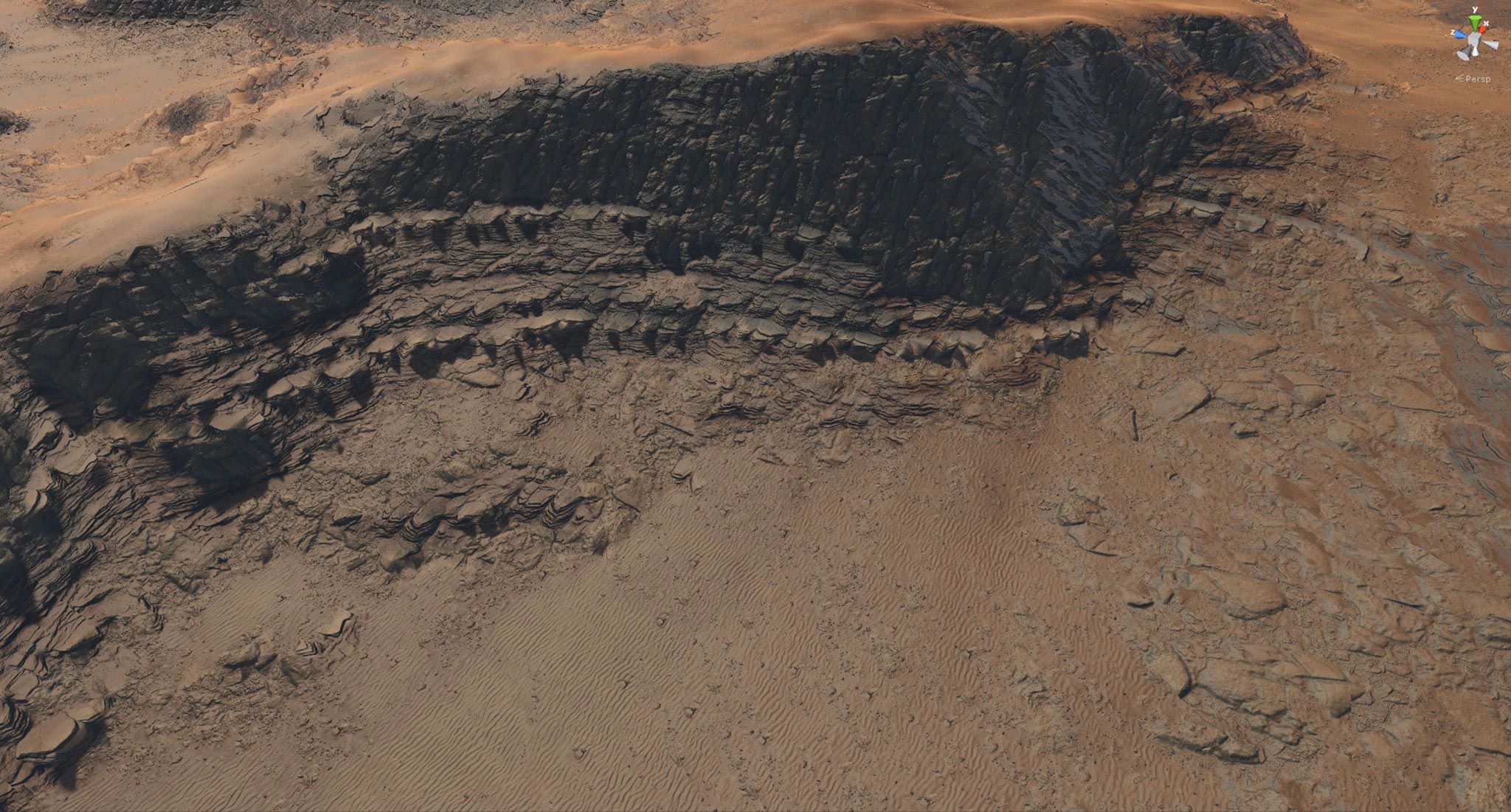 Triplanar setup with tessellation. The planar projections are very good noticeable, something that has been fixed with a more clever setup later in Unreal. 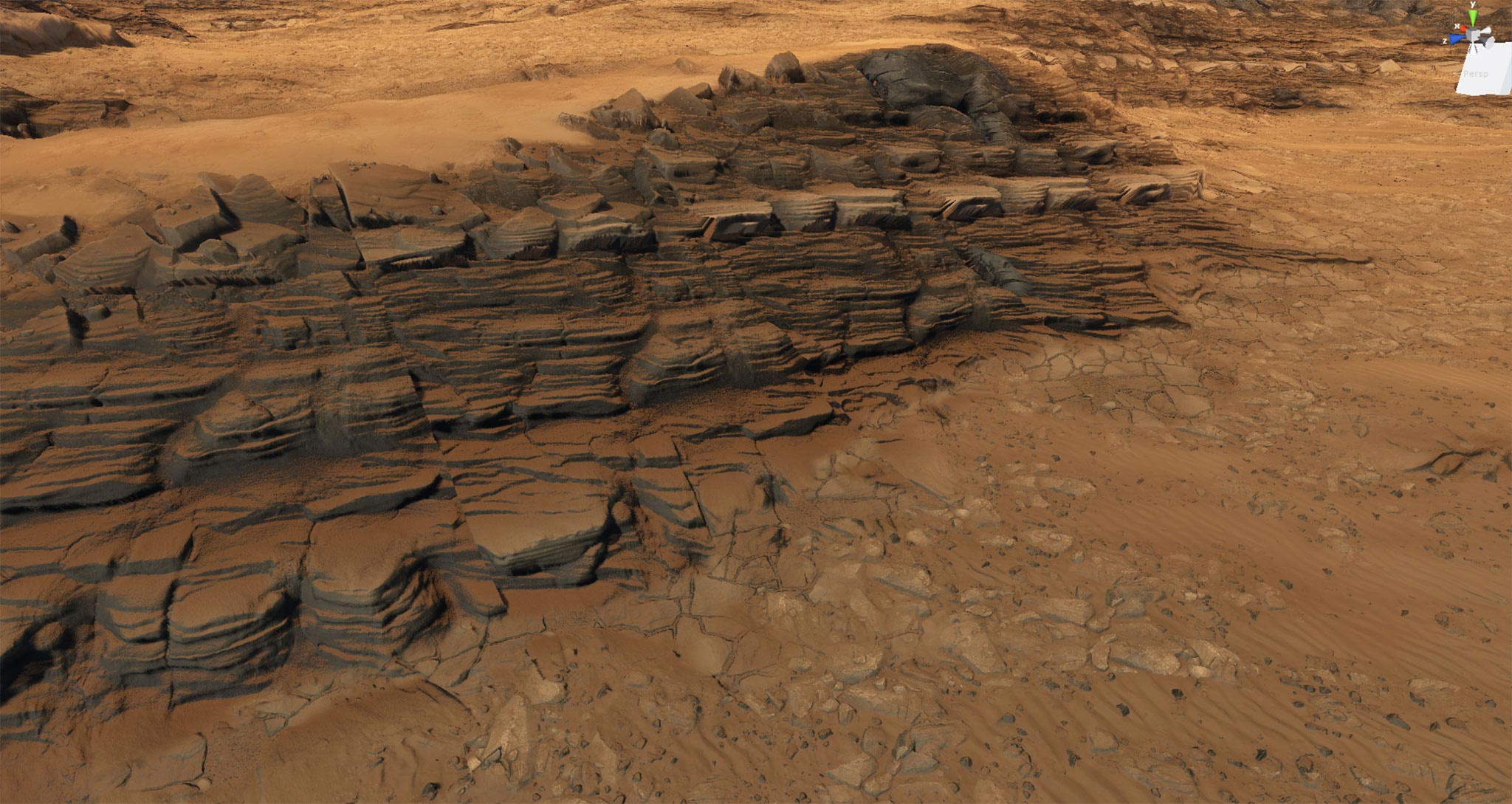 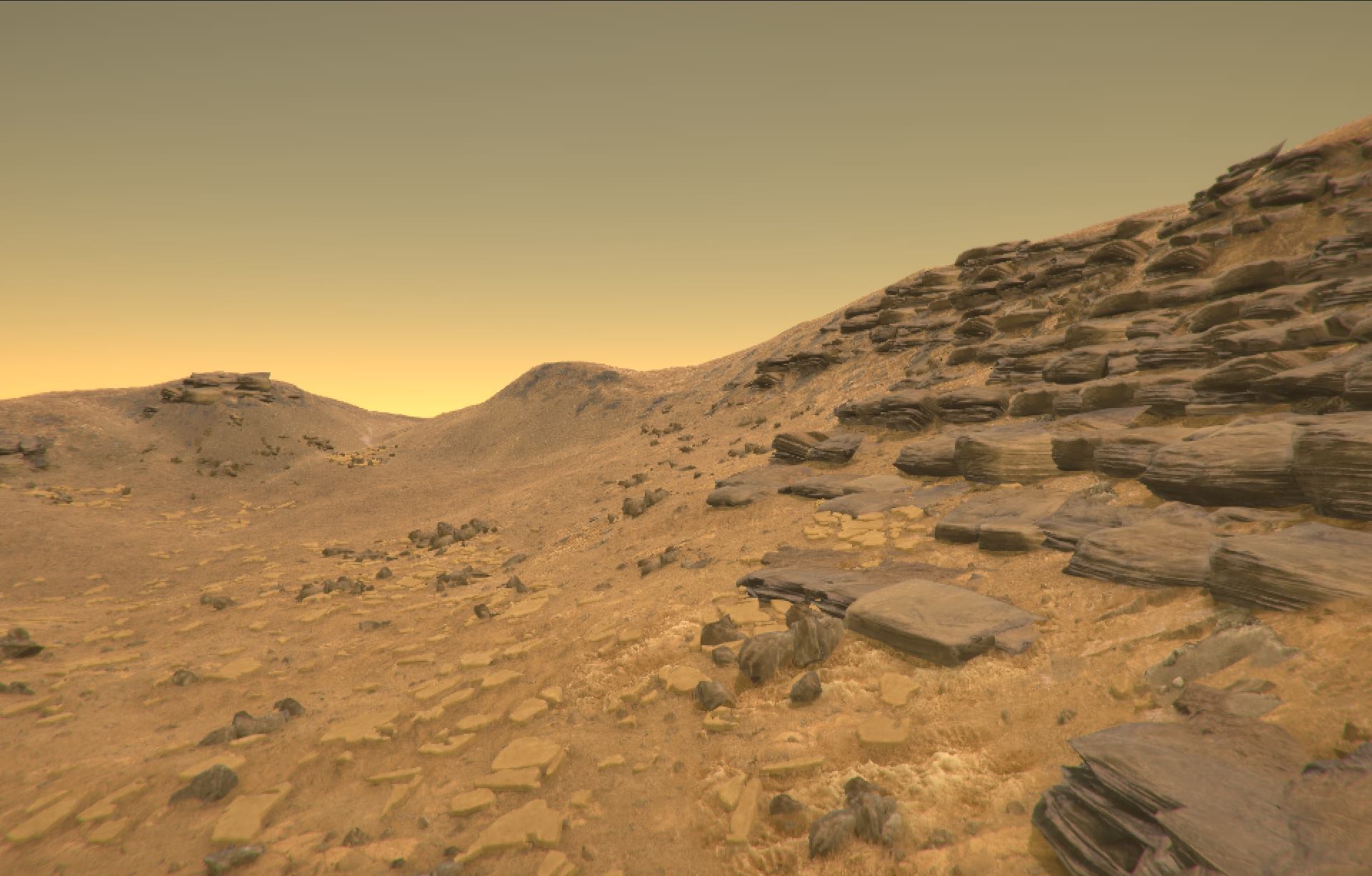 Early attempt to create those typical layered slates using geometry. I build a custom C# tool to autoplace rocks on the terrain based upon slopes and textures. (not all slopes are rocky hills, some of them are just dunes and needs to be filtered using a mask)